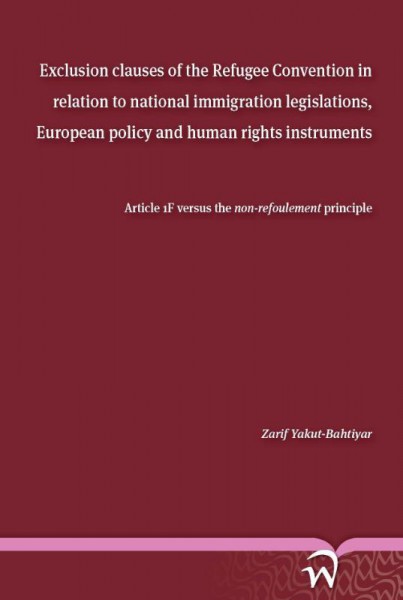 Beschrijving Beoordelingen 0
Beschrijving
Article 1F of the Refugee Convention excludes persons with respect to whom there are serious...meer
Menu sluiten
Productinformatie "Exclusion clauses of the Refugee Convention in relation to national immigration legislations, Europe"
Article 1F of the Refugee Convention excludes persons with respect to whom there are serious reasons for considering that they have committed a crime against peace, a war crime or a crime against humanity, a serious non-political crime outside the country of refuge prior to their admission to that country as a refugee or acts contrary to the purposes and principles of the United Nations. A 1F applicant loses any protection which would have been available under the Convention and, consequently, becomes ineligible for a residence permit under asylum. Though the exclusion of an asylum seeker basically leads to expulsion, this may be impossible to execute due to legal obstacles such as the non-refoulement principle. According to this principle, no one should be returned to a country where he fears for his life or freedom.
This book is the result of a study into Article 1F, including an in-depth focus on the post-exclusion phase from a national and European perspective. In this study, the author is seeking solutions regarding the dilemmas surrounding the position of non-removable excluded asylum seekers. With its description of the applicable law as it stands, its theoretical framework and comparative elements, this research is valuable to legal practice and contributes to the continual debate regarding the possibilities and limits of developing a Common European Asylum System.