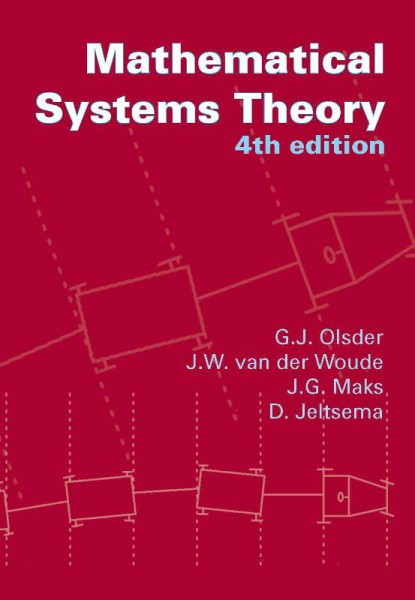 Beschrijving Beoordelingen 0
Beschrijving
A system is part of reality which we think to be a separated unit within this reality. The...meer
Menu sluiten
Productinformatie "Mathematical systems theory"
A system is part of reality which we think to be a separated unit within this reality. The reality outside the system is called the surroundings. The interaction between system and surroundings is realized via quantities, which are called input and output. Quite often one wants, through a proper choice of the input, the system to behave in a certain way.
Mathematical Systems Theory is concerned with the study and control of input/output phenomena. The emphasis is on the dynamic behaviour of these phenomena, i.e. how do characteristic features change in time and what are the relationships.
These course notes are intended for use at the undergraduate level and form the basis for other courses such as optimal control and filter theory.
The major difference between this fourth edition and its predecessor is the presentation of the material in Chapter 3. The method of linearization of a system described in this chapter has now been restricted to solution-input pairs that are constant in time (equilibrium pairs) and the presentation of the analytical method of solving a linear system is restricted to the linear systems that are time-invariant. The authors firmly believe that both these restrictions are a great improvement from a didactic point of view. Another important change in this chapter concerns the introductory text, which is hopefully an improvement in the sense that the connection with the previous chapter on modeling is now described more explicitly. A change in Chapter 4 which is worth mentioning is given by the passage that deals with the duality between the concepts of controllability and observability.
The authors have given a qualitative interpretation of this phenomenon of duality which is a useful addition to the merely symbolic method using the transposition of matrices.
Contents: 1. Introduction - 2. Some Modelling Principles - 3. Linear Differential Systems - 4 System Properties - 5. State and Output Feedback - 6. Input/Output Representations - 7. Linear Difference Systems - 8. Extensions and Some Related Topics - 9. MATLAB Exercises - Bibliography - Index
In the International Journal of Robust Nonlinear Control (2006, 16, 87-88) Christian Commault wrote in his review of this book:
"In conclusion, this book may find a very useful place in the literature on linear system theory because of its qualities of presentation and writing, its concision and its good trade-off between rigour and accessibility. It can be considered as an appealing entrance in system theory which will encourage students, and also new researchers in the field, to pursue by the study of more complete books as, for example, those cited before."